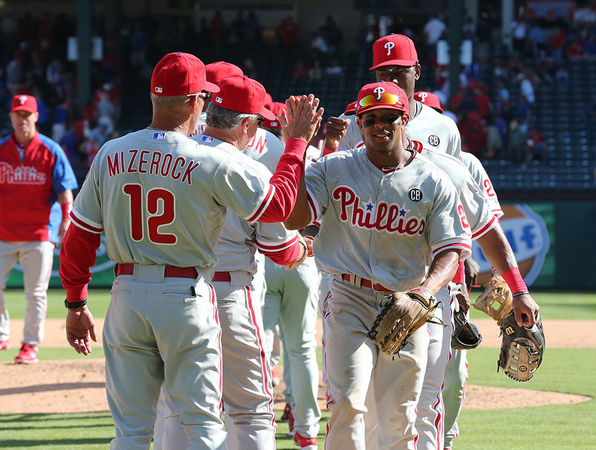 The Philadelphia Phillies lost their first game of the season, falling 3-2 to the Texas Rangers. Their record drops to 1-1.

I understood a lot of Ryne Sandberg’s lineup adjustments against a lefthanded pitcher. I liked sticking Marlon Byrd in between Chase Utley and Ryan Howard to break up the team’s lefties. I liked that he sat Domonic Brown, who at this point needs to earn the right to be an everyday player.

But I found it really bizarre that Sandberg decided to sit Cody Asche after the performance he turned in on Monday.

Asche couldn’t have had a better debut, going 3-4 with a single, a double, a home run, a walk, and two RBI’s. He was one of the team’s most exciting components of their Opening Day win, and I thought he deserved to be in the lineup again.

We saw some significant flaws of this team rear their heads tonight. The patient approach that we got from this team on Monday was nowhere to be found tonight. The Phillies didn’t work a single walk, and rarely threatened throughout the night. The lineup is going to be inconsistent.

The young bullpen was unable to protect a slim lead. Its a lot to ask of this group to hold a one-run lead for three innings, and its times like this that you know they could have really used another veteran arm. Because Ruben Amaro was unable to add another quality vet the stabilize the pen, the team had to lean on Jake Diekman in the seventh and Mario Hollands/B.J. Rosenberg in the ninth. There you have a couple of untested kids getting thrown to the wolves.

Notes From The Phillies’ 14-10 Win Over Texas