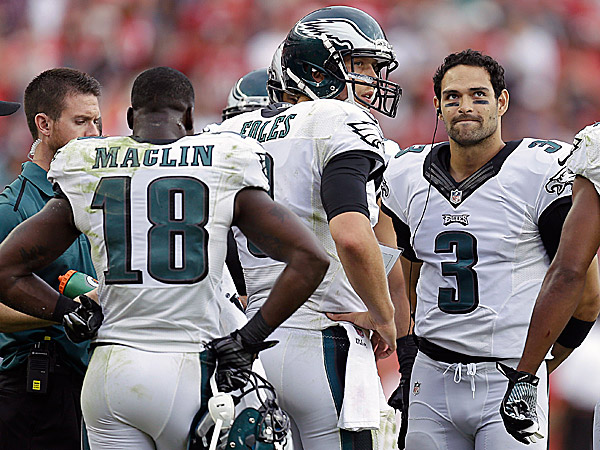 Foles’ Poor Play Catches Up With Him

Foles can’t make plays when he doesn’t have time to throw. He’s very shaky on the run, and when he can’t comfortably set his feet, its very difficult to make the throws he needs to come up with. Today F0les tossed two terrible interceptions that swung momentum towards the Cardinals.

In the first half, Foles hesitated on a throw to Josh Huff in the endzone. He held on to the ball to long, threw it late, and it was intercepted by Antonio Cromartie. If Foles throws that ball decisively, its a touchdown. Instead the Eagles come away with no points which proves to be critical later in the game. If the Eagles have even just three more points on the board, they’re lining up for the winning field goal at the end of the game instead of trying to get it in the endzone.

In the second half, Foles threw a pass behind Riley Cooper that was also intercepted by Cromartie. The Cardinals were able to take that turnover, and turn it into three points.

Even when Foles wasn’t turning the ball over, he was off and erratic throughout the game. Too many passes were thrown high, and too many of his deep attempts were ugly floaters. This is not quarterback play that leads to winning football. Anytime the Cardinals got pressure on the third year man or forced him to move around  in the pocket, he just couldn’t make plays.

The bottom line here is that you’ve got a quarterback that continues to commit multiple game-changing turnovers in every game. That’s just not acceptable, plain and simple.

Kelly Leaned Too Heavily On The Pass

Part of the problem today was that the playcalling was much too heavily skewed in favor of the pass. Nick Foles has a ridiculous 62 pass attempts in this game.

Its not like the Eagles were down by multiple scores and needed to throw, the Cardinals were never ahead by more than seven points. And even with Foles off, and with LeSean McCoy and the running game averaging 4.2 yards per carry, Kelly still put the ball in the hands of his erratic quarterback so many times that you would have thought Andy Reid was calling plays again.

Nick Foles isn’t doing much to show that he’s worth any kind of long-term investment.

With 12 turnovers in seven games, and just one turnover-free performance on the year, the Eagles have been winning despite his struggles.

But now they’re really beginning to become an issue. He’s just making some terrible decisions and poor throws right now, and you can’t win in this league when your quarterback is a threat to turn it over multiple times.

This was a game that was there to be won, but the Eagles’ turnovers robbed them of a valuable win against an NFC foe that has a good chance to make it to the playoffs. Not only have the Eagles now lost the tiebreaker to both the Cardinals and 49ers, but they’re also on the verge of falling a game and a half behind Dallas in the division standings.

Plenty Of Promise Remains For The Eagles, Despite Loss In Arizona