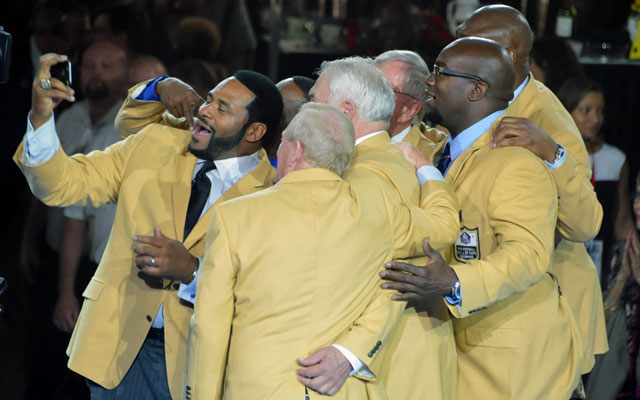 I just got back in town from the NFL Hall of Fame ceremonies, and I checked out the Eagles open workout this morning, so I’ve been getting a full dose of NFL football in the last few days.

It’s amazing all the people I got the chance to see when I went to Canton for that event this past week and weekend.  On Thursday night at the Gold Jackets ceremony, I got a chance to see all of this year’s inductees Jerome Bettis, Tim Brown, Mick Tingelhoff, Charles Haley, Will Shields, Bill Polian, Ron Wolf, and Junior Seau was represented there by his family.

Sydney Seau, Junior Seau’s daughter did a great job speaking on behalf of her dad, and she had everybody teared up.  Haley did a great imitation of Jerry Jones during last night’s ceremonies.

I’m also a Transition Coach for NFL players.  I mentor and advise college players coming into the league.  In fact, we just took on 50 high school players from around the country, who are regarded as future NFL players.

In addition , I counsel current NFL players and I advise and counsel former NFL players as they transition out of the league.

I spent time with many of the college players at this year’s NFL Combine in Indianapolis, then we worked with many of these same youngsters at the 2015 Rookie Symposium in Ohio on the last week of June.  Myself and my colleagues talk to these players about character, decision-making and self-responsibility amongst other topics.

The most fun I had in Canton was at the hotel with all the Hall of Famers. Plenty of them were there.  I got the chance to spend some time with Jim Brown, Willie Lanier, Ted Hendricks, Curley Culp, Mel Blount, Claude Humphrey, Lawrence Taylor, Harry Carson, Michael Irvin, Troy Aikman, John Madden, Forest Gregg, Dave Robinson, Jim Taylor, Willie Davis, Mel Renfro, Jackie Smith, Charlie Joiner, Curtis Martin, Thurman Thomas, Joe Greene, Jerry Rice and Ronnie Lott on and on and on.

One of my colleagues in both the Legends Community and as a Transition Coach is former Jacksonville Jaguars safety Donovin Darius, who tried to do a selfie photograph with Steelers great Joe Greene, only to have Joe respond with.

“Don’t do that”, said Joe with a serious look on his face, as Donovin had to get somebody to take a regular picture of himself and Joe. We all had a good laugh about that.

It’s amazing being there in a small room with fifty to a hundred NFL Hall of Famers.  The guys were having fun telling stories and laughing about the good old days.  Unfortunately, many of the stories that were shared were done in confidence.

Sounds like a Great Trip and Time G-Man… I am sure the experience is priceless when hearing old war stories from the greats of the game in a fun and relaxed,off the record atmosphere….