What Really Matters For The Eagles Tonight In Green Bay? 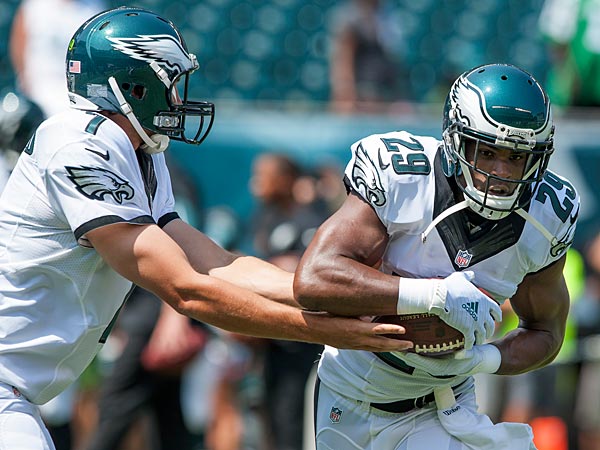 The game tonight between the Eagles and the Packers matters for a number of reasons.  Winning it isn’t one of them, but playing well is, especially the first-team units.  They’ve played well in their first two games, so continuing that tonight would be a plus, but there are a number of specific areas of focus for Chip Kelly and his football team.

First of all, we need to get another good look at Sam Bradford tonight and he needs to get more plays under his belt.  He played less than 15 snaps against the Ravens, so he needs to get some work to scrub off the rust from two years in the training room.  This will be a great setting for him in Lambeau Field in front of a noisy crowd.  The Birds number one signal caller needs this work in game conditions where the adrenaline is flowing and a quarterback must keep his cool in the midst of the chaos.

The former Oklahoma Sooner needs to get more work with his wide receivers, especially Jordan Matthews, Nelson Agholor, Josh Huff and Riley Cooper, so he can develop better timing with them.  He needs to get comfortable in the pocket to the point where he feels the pressure from the backside defensive end and knows when to throw the ball away. Bradford needs to get comfortable in the pocket and he must get a feel for the plays coming in at break-neck speed.  The Birds quarterback has to get used to the defense changing fronts just before the snap.  He need snaps to develop in this area.

The Eagles inside linebackers Alonso, Mychal Kendricks, and DeMeco Ryans need to get on the field together and get used to playing with each other.  That’s not a problem with Kendricks and Ryans, but Alonso needs some work with the Kendricks.

The former Oregon Duck and Buffalo Bill will also need to get used to playing with outside linebackers Connor Barwin and Brandon Graham.  Many times on run fakes and play action passes, the inside and outside linebackers are exchanging assignments.  They must get to the point where they know each others voices in the noise.  They must be able to communicate both before and after the snap.

The same is true of Alonso and the defensive line.  Fletcher Cox, Cedrick Thornton and Bennie Logan must be able to pick up his voice out of the noise.  Many times Alonso will be responsible for moving them, changing their alignment on motions and shifts by the offense and altering their assignments.  He will be working with them on blitzes, stunts and pass rush games.

The next area I will be focused on will be the Eagles secondary.  I want to see Walter Thurmond make some open field tackles.  I never had any doubt about him as a safety versus the passing game, but I want to see what he does when he has to tackle a 229 pound running back like Eddie Lacy in the open field.

I will also be checking out the nickel backs, Eric Rowe, Jaylen Watkins, and E.J. Biggers, to see which one of them steps up and takes the starting job.  One big play could do it.  Of course the coaching staff would like to see Rowe do it, but he hasn’t taken that step yet.  There are flashes but we haven’t seen the consistency.

The third quarterback battle between Matt Barkley and Tim Tebow continues.  Neither of them played particularly well last Saturday, so the job is still up for grabs.   Barkley would be more valuable on the open market, so it would be good for the Eagles if both of them play well.  If they both play well the rest of the way, Tebow will make the team and Barkley will get the Birds a draft pick in a trade.  We will only see Mark Sanchez for a drive tonight, but the way he’s played he could use the work.

There are other battles taking place between players for roster spots.  Andrew Gardner seems to have sewn up the right guard spot, so he’s just getting more comfortable next to Jason Kelce and Lane Johnson.  You also have running back Kenjon Barner continuing his drive to win a roster spot and safety Ed Reynolds going after that backup safety role.

Why Sam Bradford Needs To Play The First Half

Spot on analysis ,but there’s a whole facet of football I’ll be surveying on the road in a hostile environment ,and contrast them to the previous cozy home cooking,this team just left.Special teams has been a star with the exception of Cody ,who was definitively money last year.Ill also be watching the “new” 7 moving pieces and wether its seemlessly apparent they’ve already meshed.Thatwould be a testament to great coaching ,which is what I most am interested in ,on the defensive side of the ball.Themain focus was on that side ,this offseason ,mixing and matching “new”pieces is a task ,normally with a growth curve .If that’s well suited ,this could be a special season..

agree with you Dessert – gcobb nailed it

5-6 Players I am watching tonight
WR R Bailey, M Ausin and S Ajiroutu to see who makes the 53 Man Roster
TE Eric Tomlinson & Trey Burton
RB/Retrnman K Barner
WR Josh Huff – can he get off to a good start to help his psyche out or is he going to be one of those frustrated players who plays too tight
OL Backups (Vandervelde,Kelly,Andrews,Tobin, Bunche, Coccia, Molk, Moffitt & Wheeler to see which 4 Players make the Squad

Pman prediction the Eagles cut tebow..and keep Barkley ..I disagree..some of the reasons may even not be related to football as much as Chips ego.Bellicheck couldn’t make it work with great personnel ,but chip needs prove ,otherwise.He really would be. The only “R.O” option at Q.B. Of the five at the moment .Teams. May have to game plan and spy on him in different situations,including the deficient red zone of previous years.

Pman. I really like Bailey so far.The organization wants Rowe to seize that gold ring ,but bigger screen has impressed.lBailey and Austin (special teams ) gives him a leg up .I like both tight ends and wonder if chip May retain 4 ,and lighten his running back roster.Last year he did just that out of the gate .Against green bays 2-s and 3s who are assumed to start a blowout ,I disagree would be damaging to the Eagles veneer ,vs the top of the NFC heap..

No injuries is a given “like death and taxes”

Hopefully the Eagles Play well on both sides of the Ball for the #1’s & #2’s
I expect that they will.. The 2nd Half will be played by many Players on both sides who will be Cut either Tuesday or by next Sat

Steelers Secondary could be worse than the 2014 Eagles Secondary was..
Brutal.. No DC Dick Lebeau, no Palomula, Ike Taylor, & other Veterans

Packers playing Hundley? This game will be over by the end of the 1st Quarter and doesn’t test this Eagles Defense at all..

Eagles Running backs took advantage of the Packers LBs all the way up the field for 6 ( Mosert, Murray, Matthews, then Sproles)

Nice drive by the bird gang. If Tebow can’t convert that two point conversion, no need for him to be around.

Tebow lost his explosiveness with not playing the last couple of Years,
and really adds nothing to this Offense..
Eagles want to go for Two Pts and everyone inthe bldg knowsTebow will be running it since he can’t do anything else.. Eagleshave more options with RB’s Murray or Matthews, or could spread the field with 3-4 WR’s, use Triple TE Sets..with Tebow Defenses pretty much know what to expect,Tebow is either keeping it or rolling left to find a Receiver in the corner of the End-Zone

Sammy Bradford….nice command of the offense, the UN Nick Foles.

Bradford on the money again!!! with pressure in his face takes the hit and delivers a strike to Burton-Touchdown!!! I’ve seen enough…Chip you can take him out now!!! We’ve got a real QB on this team!!!!!

Please stop with this tebow bullshit!

That’s it for Bradford, good Job and no sense in continuing to play at this point..

And get this looooooozah Tim tebow the hell off my team.

TE fell down and the rookie threw it anyway.

This guy is putting the ball dead on the money…smh..dammm!!!! Touchdown…Bradford another strike…..ok I’ve seen enough lets get Bradford out of there…

DAMMMNNN!!!!!! Bradford is deadly accurate!!!
Somewhere Vinnie is sitting in the corner rocking to and fro saying Nick could’ve done that!

The only negative is Sam’s choice of shoulder pads. Jeez, they look like something fro the 70s.

Kool and Songs, I gave you guys a lot of shit about Nick Foles, my apologies. You guys were dead on right. Bradford is making this offense look goooood!!!

No problem Eaglehaslanded…at least your man enough to step up and give props!

Not since T.O s first season has pre season stoked my juices

Looks like we’ve won the preseason super bowl… Yeah us. The coach has a vision most of us didn’t see it. Now let’s be healthy and do some shit in January. Bradford is his Brady …

NolanCarroll involved with the only 2 big plays the Packers have made
Packers Started with 3 Backups on their OL,a Rookie QB, a Rookie WR
So much for the meaningful Game # 3 of the Pre-Season
Eagles Should get all Starters out and focus on the Falcons and let the backups & rotational Players &3rd Stringers get theirReps

If you said trade Sproles…..you should not post for the rest of the preseason….just saying….

is the ink dry on that Kendrick’s contract ?

Kendricks is a liability in the Passing Game..DC Davis needs to have MK Blitz inand let Alonso, Ryan’s or evenBarwin drop back in pass coverage

paulman you are ridiculous!

I to apologize to kool and songs they were right

No problem zilents44 at least your man enough to step up and admit it!

Nobody gives a fuck what a fraud. Eagles just crushing and ur watching Seattle get outta here

Hundley is a good player!

Amen and when we are in process of winning it flip floppin fraudman will be live blogging Charlotte Hornets basketball.

The Chip Kelly gamble gives us a chance that we didn’t have before! Chip Kelly knew that we had absolutely no chance at all to win with Nick Foles…he had to upgrade the talent at the position…and this is what he accomplished in getting Sam Bradford!

We have a good pass rush but still not a dominant one. In comparison to our run defense our pass rush still needs help and aided by the blitz. I need to see another step taken to the next level from Fletcher Cox.

Going against 3 Backups on the OL and a Rookie QB, the Eagles should be stuffing the Packers Offense…