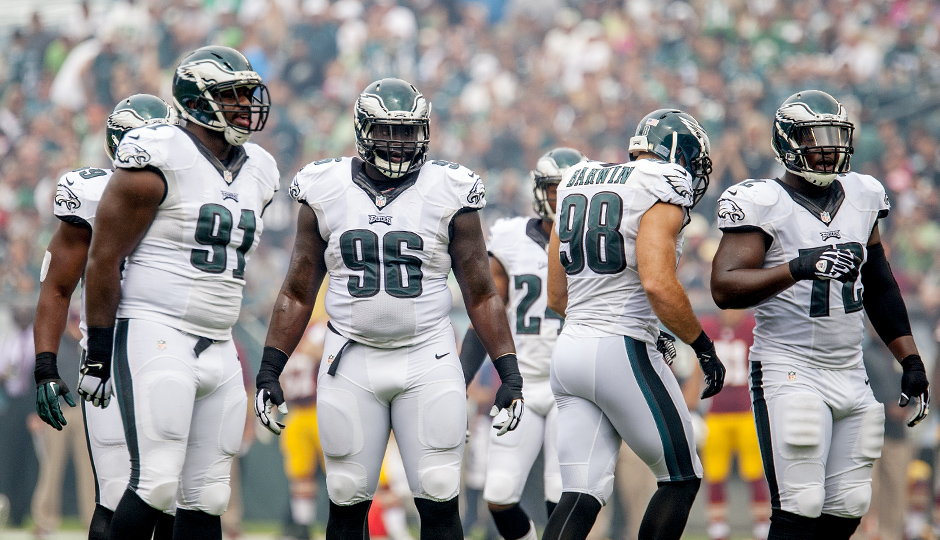 Tomorrow’s game is likely to be a low-scoring affair with the game being decided by turnovers.  The Eagles need to take care of the football on offense and force some turnovers on defense. They desperately need this game.

The New York Jets offense isn’t a high-powered attack.  This Ryan Fitzpatrick-led offense will run the football and throw the ball to underneath routes. They’re going to try to control the football, avoid making mistakes, especially turnovers and reach the end zone when they get in the red zone.

The Eagles need to be sure tacklers.  New York relies on their playmakers to break tackles and turn short throws into big plays.

Jets running back Chris Ivory is questionable for the game, so his backups Bilal Powell and Zac Stacy may have to take over.  New York has an experienced offense line, which has been together for a number of years.  Center Nick Mangold plays at a Pro Bowl level and left tackle D’Brickashaw Ferguson is an outstanding pass blocker.

The Eagles front seven, which is led by Fletcher Cox, must win the battle upfront and take away the Jets running game. They’ll have to do it without defensive linemen Cedrick Thornton and Taylor Hart, who will miss the game with injuries.  The defensive front needs to force Fitzpatrick to take some chances with his throws.

Eagles cornerback Byron Maxwell should match up well against the Jets leading receiver Brandon Marshall.  Marshall is big, physical wide receiver who catches everything that comes his way, but he’s not a speedster.  Maxwell should be able to match up well with him as long as he’s plays gets up on him and plays him tough.

Marshall is not going to run away from Maxwell, so he should feel very comfortable walking up into the press technique.

Nolan Carroll isn’t quite as big as Maxwell, but he’s got good size and should be able to get after Marshall and wide receiver Eric Decker, if Decker is able to play.  Decker is much like Marshall, in that he’s got great size, outstanding hands, but his speed is just average.

Marshall and Decker know how to run routes with Marshall being one of the better route runners in the league.

These should be good hard-fought battles and the Eagles must at least break even.  They can’t afford to have either Marshall or Decker having big games.

The guy that I’m concerned about is rookie Devin Smith, who is a deep threat.   The Eagles safeties need to know where Smith is lining up at and should be talking about it.  I don’t think he will hurt them with short or intermediate routes, but he does a great job of getting behind defensive backs and adjusting to deep throws.

Eagles Offensive Line Must Get Back To Their Fundamentals

DeMarco Murray Is Out Today And Controversy Is On The Way

The jets ,sport a very capable O line.The helmet on a helmet approach won’t suffice.Bill Davis will need devise trickery against his nemesis Todd Bowles.With both Line backers down ,the stakes getting even higher at the front and back end..

Decker is not Playing and Devin Smith played 1 half of the first Pre-Season so he is likely to be rusty seeing his first real action of NFL Footbal at full speed..

Jets have experience on their OL but do have new Guards in James Carpenter (who I wanted the Eagles to pursue) and William Colon who is a 10 Year Vet who has bounced around as has RT B Giacomo so this Jet OL Unit has not been together any longer than the Eagles who have Peters,Kelce & LJ playing in their 3rd Season together …

I betted on the Eagles the first two weeks. If I bet with my heart, I take the Eagles to win today, however, I am going with my head and say the Jets win as their defense stymie the Birds offense. Hopefully I am wrong, praying I am wrong as 0-3 will kill me!
Show me something Chip!!!
GO EAGLES!!!

There are certain games inherent in a season that defy logic.This is one of those pivot points. Both in the Chip GM/coach era and the Sam Bradford era.I can not see the Eagles Coming out-flat,and be pushed like a blocking sled.The Pope is in town ,so divinity trumps culture..