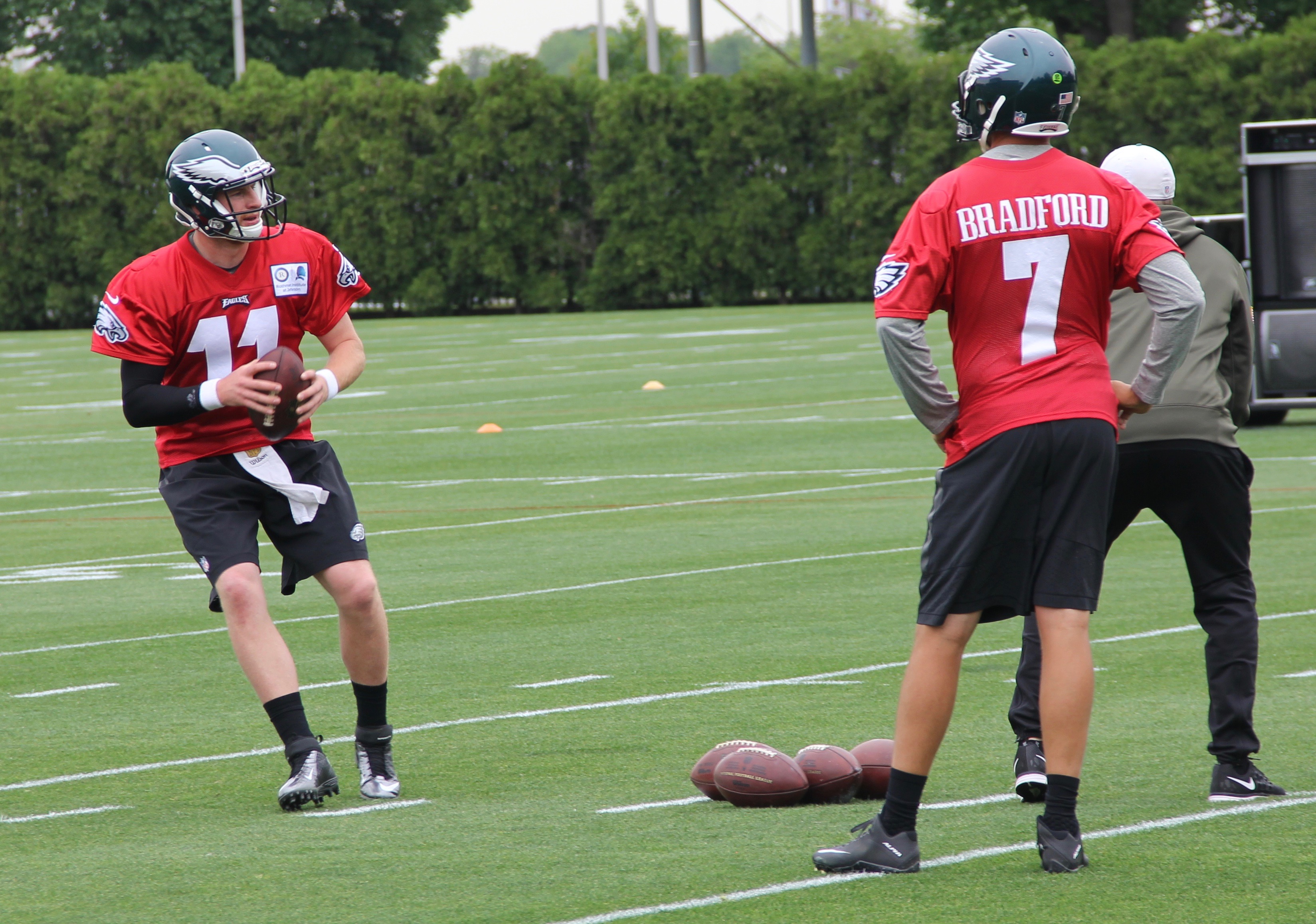 It’s going to be interesting see how things work out at the quarterback position as we go forward.  Sam Bradford is the starter, but he’s going to run this offense very conservatively.  He’s going to be Check Down Charlie just like Alex Smith in Kansas City only he’s not as good of an athlete.  Bradford will be throwing the ball to his running backs and tight ends most of the time.  Chase Daniel will be much the same.  Rookie Carson Wentz is the only quarterback in the group who will always be looking to throw the ball downfield.  Jimmy Kempski of PhillyVoice.com takes us through a couple of outstanding downfield throws that Wentz made yesterday.  I don’t think they be able to keep Wentz on the bench the entire season with these Check Down Charlies in front of him. The top quarterbacks in this league throw the football down the field.

I thought Eagles backup tight end Trey Burton did more in OTA’s to improve his stock than any other player on the roster.  Kempski singled him out.  Remember these comments by offensive coordinator Frank Reich.  “I love Trey Burton,” said Reich. “He’s a football player. That guy understands the game. He’s very athletic. He’s got good size. Some guys just know how to play. You can put them on the field, put them at any position it seems like. He really impressed me in OTAs.”   Get used to a lot of Zach Ertz and Burton.

It was a quick workout yesterday that was inside on the turf because the rain forced the Eagles to change.   Defensive coordinator Jim Schwartz put a couple of guys he knows on the corners, Leodis McKelvin and Ron Brooks.  Interestingly, when they went to nickel, they put one of last year’s starters, Nolan Carroll outside and moved Brooks into the nickel position.  I think Carroll will take his starting spot back, but I expect Brooks to be the nickel.   PhillyMag.com’s Tom McNanus gives you a quick Diary Run Down of what happened at practice yesterday.

I hope Jason Peters is going to be able to back up his talk with quality play on the field this year. He took plenty of shots at Chip Kelly yesterday, but I think he’s really battling his body aging.  I’ve told you before about what has been my observation of more than 30 years of NFL history.  When guys start getting hurt near the end of their careers, they usually never stop. Paul Domowitch who has been covering the NFL for decades agrees with me on the opinion that Peters is battling the clock.

Nelson Agholor stepped up and took responsibility for making the bad decision of going into the strip club, which wound up getting him charged with rape, that was later dropped.  He said he’s going to make sure this doesn’t happen again by making good decisions.  My question for Agholor is, why didn’t he give the girl the $600 and get out of there.  Your name is damaged for $600.  The youngster made millions last year and he can’t hand over the $600.  That was another bad decision that he’s paying for and will continue to pay for.

Linebacker Nigel Bradham is in deeper hot water because he’s been charged by the prosecutor in Miami with aggravated battery which is a second degree felony.  Rich Hoffman of PhillyVoice.com tells that Bradham thinks he’s going to be cleared.  I don’t know about that.  You break the nose of a 50-year old man that weighs 160 pounds.  The former Bradham could wind up missing some games and we all know that the Birds are lacking when it comes to depth at the linebacker position. Les Bowen of Philly.com gives us a thorough run down of what went down with both Agholor and Bradham and what the fellas had to say yesterday.

Morning Eagles Talk To Get You Started – July 28