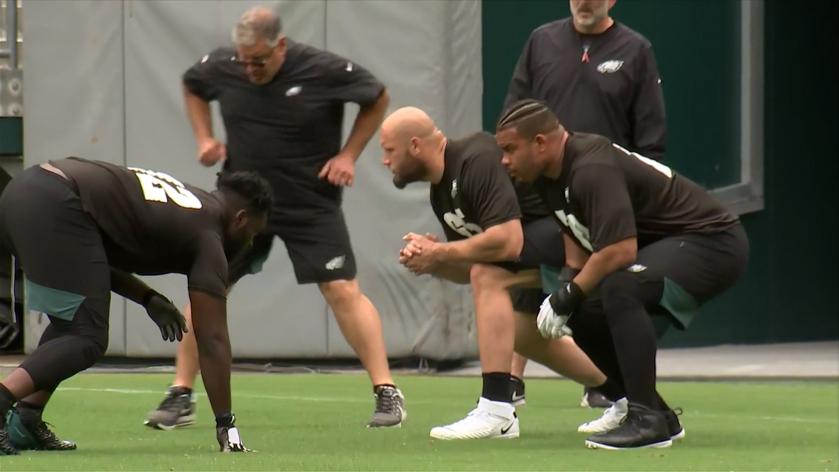 It’s very simple, if the Eagles can stay healthy upfront, they’re going to be a much better team this year than they were in 2020.  They could have an outstanding offensive line.  The Birds will have tremendous size and athleticism throughout this group of five and they will also have quality depth in back of the starters.  This group will be dominating as both run blockers and pass blockers.

The Eagles success upfront starts with one of the best offensive line coaches in the NFL in Jeff Stoutland.  He’s a great teacher and developer of talent.  He does an outstanding job of working with his players, so that they are fundamentally sound and always trying to get better.   Stoutland had a lot to do with the Super Bowl Title team because his offensive line was outstanding throughout that championship season.  He lost a future Hall of Famer in left tackle Jason Peters late in the season, but developed young tackle Halapoulivaati Vaitai to the point where he stepped in during the playoffs and didn’t miss a beat.

Eagles Pro Bowl center Jason Kelce, who is one of the most knowledgeable and talented centers that I’ve ever seen, makes the calls at the line of scrimmage.   The Eagles take advantage of his athleticism and blocking skills by letting him get outside on screens and pull on sweeps, which is unusual in the NFL.  He uses his outstanding quickness and power to get in position to block big guys in the middle of the defensive line and smaller, quicker defenders outside in open space.

Right now, the Eagles right guard and right tackle are the best combination of guard and tackle in the National Football League.

There’s not a right guard in the league better than Brandon Brooks when he’s healthy.  He tore his Achilles tendon last year. but now he’s rehabilitated and back at full strength.  Brooks is a mammoth physical specimen standing 6’5″ and weighing 335 but he has tremendous quickness and power.

You can say Eagles right tackle Lane Johnson is the NFL’s best right tackle when he’s healthy.  He’s recovered from an injured ankle and back at full strength.   Johnson at the right tackle spot is a physical freak standing 6’6″ and weighing 315, with amazing quickness and athleticism. Johnson is a tremendous competitor and he plays his best football against the very best competition.  He has shut down the likes of the Browns  Myles Garrett, the Saints Cameron Jordan, the Broncos Von Miller and the Bears Khalil Mack.

When you look at the Eagles left side, they are going to need to develop.  They’re going to need to get used to working together, whoever becomes the starters.  When you look at potential of former Australian rugby player, Jordan Mailata, it’s staggering.  He stands 6’8″ and weighs 360, but is very athletic with quick feet and tremendous arm length.  His competition is former first round pick,  Andre Dillard, who was impressive when he was drafted but now is said to have put on 15 pounds of muscle.  I think the Eagles are going to be pleased with whichever player wins the competition at the position.

The left side of the Eagles offensive line isn’t as settled as the right side.  Isaac Seumalo is the starter at left guard.   He’s solid and consistent.   The veteran left guard is used to playing beside Kelce and familiarity is very important on the offensive line.  Many times they don’t have the time to talk to through who they should block versus a blitz.   They have to be able to make adjustments and correct decisions in a split second.  Each player must be able to accurately anticipate, who the guy next to him is going to block.

Seumalo isn’t likely to get any competition from Eagles second-round pick, Alabama monster Landon Dickerson, who stands 6’6″ and weighs 333 pounds.  The youngster might be able to challenge Seumalo for the position in the future, but he was put on the Active/Non Injury Football Injury list because he’s still recovering from a knee injury he suffered while playing for the Alabama Crimson Tide.  Dickerson is potentially a dominating player, who can play both guard and center.

Quality depth throughout the offensive line is an additional reason to be excited about this year’s Eagles offensive line.  Seumalo has missed the last couple of training camp practices, but the Birds were able to slide third-year guard Nate Herbig into that spot.  He’s playing well.  Right guard Brandon Brooks missed a couple practices because of hamstring tightness and they were able to insert Matt Pryor.  Pryor’s doing a good job.  Both Herbig and Pryor were able to gain valuable playing experience a year ago because of all the injuries on the Birds offensive line.

Young offensive tackle Jack Driscoll stepped in for Johnson last year and gained experience like the other young offensive linemen.  It was a problem then, but now it’s become an asset because the Eagles have tremendous depth upfront.  They have young experienced players at each position that can step in and play solid, mistake free football.

This potentially dominant offensive line could take pressure off of young quarterback, Jalen Hurts, as well as the Birds wide receivers and their defense. They’re probably going to be able to run the football well because they also have solid blocking tight end, Dallas Goedert, who is as good of a blocking tight end as there is in the league.   Top running back Miles Sanders is primed for a breakout season and I expect head coach Nick Sirianni to feature the young running back in both the running game and passing game.

On another note, everybody seems so eager to get rid of Pro Bowl tight end Zack Ertz, but if you get that running game going with Ertz getting open over the middle, you could almost guarantee   the success of Hurts.  Number 86 gets open down after down against the linebackers, safeties and corners.  Defensive secondaries will focus on stopping Ertz and that will help the team’s young wide receivers develop.  Goedert has developed into a good receiver and he will also be a great target for Hurts.

Most Eagles fans don’t realize how much better Ertz made Carson Wentz and Nick Foles.  They always knew they could go to him, so they leaned on him despite teams double-teaming him to try to take him out of the offense.  The throws to the tight ends are usually the easiest throws a quarterback can make.  Again, the presence of Ertz will take pressure off of Hurts and the wide receivers because like the WaWa, he’s always open.  I’m sorry but I had to put that in there. LOL