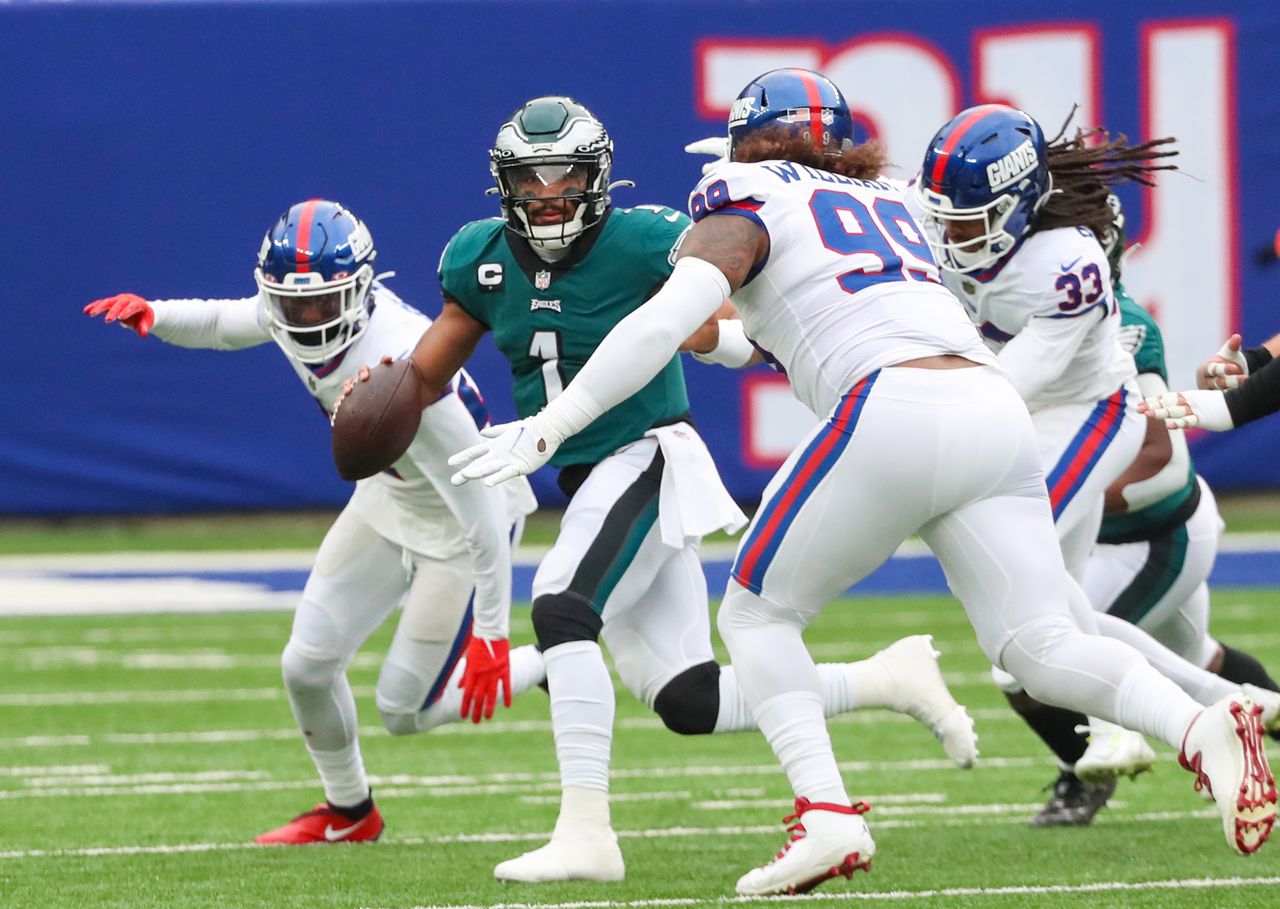 The first Interception that Jalen Hurts threw occurred with about a minute to go in the first quarter. It was a third and five and the Eagles had the ball near the Giants 20-yard line. DeVonta Smith came in motion to create a bunch formation to the Eagles right side, then he ran a short crossing route to clear the middle of the field for.Quez Watkins. Watkins, who was part of the bunch formation on the right side, ran a deep trail or crossing route at about 15 yards in depth. Hurts followed Watkins with his eyes and that drew deep middle safety Darnay Holmes. Instead of staying deep, Holmes read the eyes of the quarterback and came up to pick the ball off. For some reason, Watkins stopped running on the route, which was part of the reason for the pick. Hurts could have thrown the ball into the left flat to Boston Scott who was wide open. Instead, he got greedy and tried to connect downfield on a 15 yard throw to Watkins.

I thought Hurts forced the second interception or threw it out of frustration. The play began with eight seconds left to play on the clock in the second quarter. The Eagles quarterback took the snap stood in the pocket, looked across the middle where the Birds were running a mesh route, meaning they were trying pick off the defenders. Tight end Dallas Goedert was running a crossing route and starting to come open, but the pass pressure was in the quarterback’s face, so he took his eyes off downfield and rolled to right. Hurts continued to look downfield in the corner of the end zone and DeVonta Smith was covered. Giants linebacker Tae Crowder pushed Eagles running back Boston Scott down, as he covered him near the sideline. There was no one open, but out of frustration or with a prayer, Hurts threw the ball anyway. It was picked off by Crowder who ran the ball down the sideline and was stripped by Smith but there was 00.00 left on the clock as the ball rolled out of bounds.

The interception that Hurts threw in the third-quarter was basically a prayer because Jalen Reager was running into a three deep coverage. DeVonta Smith was open short on the left side on a curl route and Boston Scott was open short on the right side on an out route. Hurts seemed to have his mind made up the time he got his hands on the football. He threw it up to give him a chance to make a play but Reager is not good at adjusting to the ball in the air. He doesn’t get to the ball at its highest point, so he did a poor job of trying to prevent the interception. Reagor never even got off the ground. He did tackle Xavier McKinney after he caught the ball but he didn’t try to get the ball its highest point as a receiver. I don’t think Reager has the confidence to try to do that so he just watched the safety pick the pass off.   It wasn’t a good decision by Hurts.

Sent from my iPhone